I love houseguests. Aside from an excuse to cook big family dinners (accompanied by more wine than usual), hosting friends is the push I need to stray from familiar stomping grounds. Kristy was visiting from Mombasa over the weekend, and she soldiered through some “slight malaria” to have some serious fun.

Saturday was a trip to the National Museum. I head there regularly to stroll around the botanical gardens, but this was the first time I laid out the shillings to actually go inside.

The museum has an extremely extensive collection of birds, as well as some interesting art, exhibits on the origins of mankind and the development of Kenya, and the requisite hall of taxidermied animals.

On Sunday, we saw animals that were actually alive. And when I say saw, I mean got hipchecked by a baby elephant and got covered in giraffe spit.

The David Sheldrick Trust is an elephant orphanage located on the outskirts of the city, near Nairobi National Park. Elephants are fiercely loyal and family-oriented, so the only time a baby elephant finds itself alone is when its mother is dead or severely injured. The trust rescues and raises young elephants that have been orphaned by natural causes (unlikely), human greed (likely), or animal-human conflict (also likely), such as farmers killing elephants that encroach on their land. The elephant-keepers raise the orphans, socialize them, and then after a few years they begin the years-long process of  reintroducing the young elephant into the wild at Tsavo National Park.

There is a fantastic episode of The Nature of Things about the Sheldrick Trust, here. It’s equal parts heart-warming and fascinating, as is attending the 11 am feeding at the trust.

when all goes according to plan, the older elephants "adopt" the younger ones -- these two are about two weeks and two years old, respectively

After the elephants, we headed to the Giraffe Centre. It’s run by the African Fund for Endangered Wildlife, in an effort to protect the Rothschild giraffe. They have an info centre, walking trails, and a raised platform where you can come face-to-face with the giraffes that live at the centre.

When I reached the top of the stairs and emerged onto the viewing deck, I was momentarily paralyzed. A giraffe was staring right at me, and — not going to lie — I let out a little shriek of joy.

why sure I'll take that food pellet -- you know what? I'll just make sure to suck all your fingers clean, too

Giraffes are way cool. Their faces feel just like a horse’s. Their little antennae might look soft, but they’re actually fur-covered horns. Their tongues are huge. 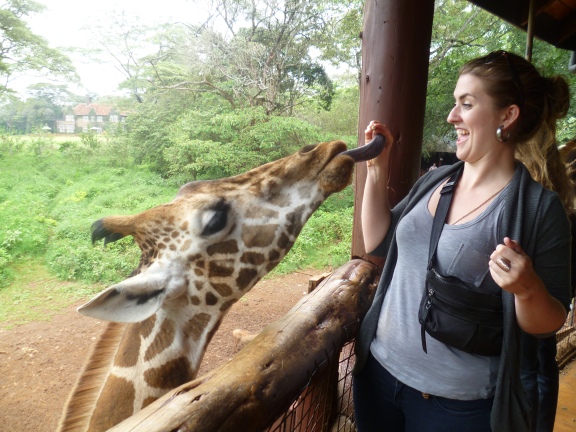 When we cleansed ourselves of giraffe spit, it was time for lunch in Westlands. Gorgonzola cheese, avocado, pesto, bacon on a baguette — as if the day couldn’t get any better. Plus, bonus: it barely rained all weekend.

3 thoughts on “tourist at home”