The Mrs. got lucky and had two birthday parties, and at celebration-the-second, the topic of baking bread came up. I lament the day humanity became too busy to devote hours on end to waiting for little yeasticles to elaborately construct flexible strands of gluten. (Clearly I have no idea how the science of bread works.) I think the lack of bread-baking going on in the modern home has a lot to do with the fact that women aren’t just hanging around the kitchen all day, hanging out laundry and scrubbing floors between rises. Those uppity bitches.

I agreed to share my challah recipe with another charming party-goer. And then I thought, faithful reader, why not just do it up style: bake some challah and share it with the world.

Challah is the first bread I ever baked. I’ve since moved on to a five-minute no-knead bread as a standby, but nothing beats the egginess and the lightness and the faint sweetness of challah done right. I tend to eat the entire loaf within 24 hours of baking it — most of it directly after it comes out of the oven — so my suggestion is to just slather with butter and die a thousand little deaths of happiness. I swear to god if Gaddafi got a taste of this there would be peace in Libya. I’d say it has the power to bring peace to the Middle East, but when we consider the religious origins of challah the argument falls apart.

This recipe makes two large loaves and is an all-day affair. Give yourself five hours start to finish (most of this is waiting for your rises, during which time you can paint your toenails or throw cats at the neighbours’ kids). You can easily halve the recipe — I usually do so, because I know if I make two loaves, I’ll eat two loaves. Unwise.

We start with the liquid ingredients. In a medium saucepan, bring just to a boil:

Pour it into a large bowl and let it cool to lukewarm, about 105-115 degrees farenheit. This is where a kitchen thermometer comes in handy, but if you don’t have one just cool it until you can comfortably leave your finger in the mixture for more than 10 seconds, but it still feels plenty warm to the touch. Too cold and your yeasticles won’t wake up, too hot and they’ll die. Fussbudgets. Stir in:

Let sit for 10 minutes, while you get out a small bowl and beat:

Once the yeast is all cozy and snuggly, add in:

Now, you should have a sticky dough. Flour a (clean!) work surface and turn your dough out onto it. Gradually sprinkle over the dough:

And begin to knead. This part isn’t hard, per se, but I always find it a challenge to know when the bread is kneaded enough. You want a smooth, elastic dough. As you’re kneading, add more flour as necessary (beyond the 6 cups we already put in). You want to knead for about 5-10 minutes, until it springs back to the touch when poked. Alternatively, you can rip off a small piece and try to stretch it out in a sheet — if it gets to the point where it’s so thin that light can get through, without ripping or stretching unevenly, then it’s good to go. Wash your big bowl, and smear it with:

Toss your doughball in there, and turn it to coat lightly with delicious buttah. Cover the bowl with a tea towel, and put it somewhere warm — but not hot, or you’ll kill our yeasticle friends!* On top of the fridge is good, or on top of the stove if you’ve recently been baking/cooking.

Once your doughball is tripled in size (1-2 hours), re-flour your work surface and introduce it to your risen dough. Cut your dough in half, and then cut each half into three even pieces. Roll each piece out into long “snakes” of approximately 18 inches. Take three snakes and braid them together, pinching the ends together and then tucking them under the loaf (pinching them onto the bottom of the loaf to make sure they stay). Repeat with the other three snakes.

Dust a large baking sheet with:

And put your loaves on the sheet, with room in between them so they can rise again (it’s Jesus bread!) (oh wait it really is, he was a Jew too!). Allow to rise for one hour. About 10 min before they’re ready, preheat your oven to 350 degrees. In your egg bowl, beat together:

Brush this egg wash over the top and sides of your loaves. It will make your bread shiny and even fancier-looking, like it’s not impressive enough to boast that you baked bread from scratch. Sprinkle over the loaves:

Pop those buns in the oven and bake for 30 to 35 minutes, until they sound hollow when their bottoms are thumped. Sounds weird, but you’ll know exactly what I mean. 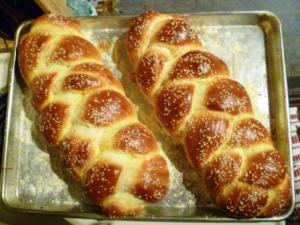 When it comes out of the oven, tear into that baby! I’m writing this as my batch bakes, and it’s all I can do not to wrench that oven open right now, open my mouth and bury my face in its half-baked splendour. It’s great with anything: butter, honey, jam… whatever cranks your caboose. When it’s hot it almost doesn’t need anything.

I know this recipe is a little involved, but I mastered it my first time out and I think you can too! It is guaranteed to impress the most difficult people in your life, with the added bonus that it’s so good they’ll stuff their faces and eventually end up fat.

* should vegetarians and vegans technically be eating bread that has yeast in it? Doesn’t it kill a living thing? Think of all those little yeasticles sacrificing their lives so we can have fluffy, magnificent loaves of joy! Sounds like we’re getting into slippery slope territory here.